The History And Biography  Of Hazrat Imam Ali(A.S) 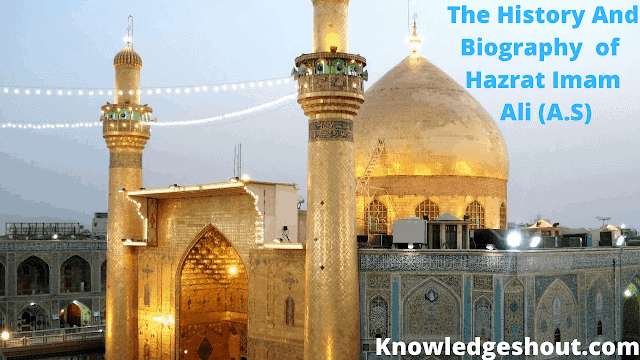 She Was gave birth to Imam Hassan (A.S) on the date Is 15 of Ramadan, 3 A.H. and to Imam Hussain (A.S) on the fifth of Sha`ban, 4 A.H. History mentions about another son of Imam Ali(A.S), Mohsin, who dying in very early childhood. Some say that he dying before birth in an accident miscarriage According to Shia ulemas. This was a tragedy in the History of Islam that happened within about a year of the passing away of the Prophet (PBUH). She gave birth to two daughters. The elder daughter was Bibi Zaynab whose title was al-`Aqilah. The second daughter was Bibi Zaynab al-Sughra whose kunya was Ummu-Kalsoom. Zaynab al-Kubra was married to `Abdullah ibn Ja`far and Ummu-Kulthūm was married to Muhammad ibn Jafar.

In deference to the will of Fatimah al-Zahra’, Imam Ali (A.S) married her. She was giving birth to Muhammad al-Awsat who was martyred in the war or Battleground of Karbala.

Amir al-Muminin (A.S) asked his brother `Aqil, who was an expert at Arab genealogy, to select a lady from any tribe that is known for its exceptional valor so that she giving birth to two sons. Hazrat Aqil suggested to him to marry Bibi Ummul-Banin al-Kalabiyyah whose tribe was famous in All Arabia for their exploits of chivalry and bravery and for Imam Ali (A.S) wedded her. She gave birth to four sons: Hazrat Abbas, Hazrat Abdullah, Hazrat Usman, and Hazrat Jafar. Hazrat Abbas was born in 26 A.H and In the Holy City of Madina. he was the eldest of among the four brothers. Then, Hazrat Abdullah, Hazrat Usman, and Hazrat Jafar were born in that order. All the four brothers fight with bravery and were martyred by the troops of Evil Yazid in the Battleground of Karbala.

The Islamic Writer Ibn al-Athir writes in al-Kamil and Ibn Sa`d in al-tabaqat say that two sons were born to her. They were Abū-Bakr and `Abdullah. Some historians are of the opinion that both the names were of the same person. Shaikh Abbas Qummi writes in Muntaha al-Amal that she gave birth to Muhammad Asghar and Abu Bakr. Sayed Muhsin-al-Amin writes in A yan al-Shiah that apparently the two names were that of the same one person. Muhammad Asghar is the name and Abu Bakr is the kunya. Shaikh al-Mufid too considered Abu Bakr as his the kunya. He was to martyred in war or battleground of Karbala.
5th-Wife Bibi Syeda Asma(S.A):
According to Ibn al-Athir writes in al-Kamil that Muhammad al-Asghar was born to her. Ibn Saa`d written in al-tabaqat that she gave birth to Yahya and `Awn. Yahya dying while Imam Ali (A.S) was alive and was also on an Imam Hussian(A.S) side martyred in the battleground of Karbala.

She gave birth to Muhammad who was well-known with the title of Ibn al-Hanafiya. His kunya was Abul Qasim. He died in taaif  81 A.H.

She gave birth to one daughter who died in her childhood. Besides these wives, Amir al-Muminin had several slave girls whom he had and Imam Ali(A.S) married them. and Imam Ali(A.S) Had some daughters are some from the other wives of Imam Ali(A.S) and The daughters were born through these alliances were Ummu-Hani, Maymunah, Zaynab al-Sughra, Ramlah al-Sughra, Fatima Umamah, Khadija, Ummul-Kiram, Ummu-Salamah, Ummu-Jafar, Jumanah, and Nafisah. At the time of the martyrdom of Imam Ali (A.S), other wives of Imam Ali(A.S) were survived these are names of wives of Imam Ali(A.S) Bibi Umamah, Bibi Asma bint Umays, and Bibi Ummul-Banin besides the 18 slave girls. His progeny continued with Imam Hasan (A.S), Imam Hussain (A.S), Hazrat Muhammad Hanfiya, `Hazrat Abbas, and Umar al-Atraf. Some other ulama say that the total number of children of Imam Ali(A.S) he had was 25, some others say that it was 28 and others say they were 33 or 35 there so many different views of Islamic scholars The reason for this difference is perhaps some of them had counted the name and the kunya as separate persons. Someone has counted Hazrat Muhsin in the list of children of Imam Ali(A.S).

Imam Ali(A.S) Important for all Islamic World politically and spiritually The numerous biographical sources about Ali are often biased according to sectarian lines, but they agree that he was a pious Muslim, devoted to the cause of Islam and a just ruler in accordance with the Qur’an and the Sunnah.[2] While Sunnis consider Ali the fourth Rashideen Caliph, Shia Muslims regard Imam Ali(A.S) as the 1st Caliph and Imam after Holy Prophet Muhammad(PBUH). Shia Muslims also believe that Imam Ali(A.S) and the other Shia Imams, all of whom are from the House of Holy Prophet Muhammad’s(PBUH), known as the Ahl al-Bayt, are the rightful successors to Holy Prophet Muhammad(PBUH).

These are the famous Quotes of Hazrat Imam Ali(A.S) and it depends on us to take a lesson from these quotes of Imam Ali(A.S) in our daily life.
1- Imam Ali(A.S) said then our followers are like bees that live among just like birds and none of those birds realized the bees reason of there small in size and weakness they would not treat like them this way if they knowing that these tiny bees can carry honey which is very important of there stomachs.
2- Imam Ali(A.S) said about the true friendship the true never allow you to did the wrong thing in your life but some other friend like but there black heart and they let you to did the wrong things and becomes evil person like they genuinely are(wicked person).
3- Imam Ali(A.S) said about the true friend just like a diamond and brother just like gold if gold breaks you can malt it and make batter but a true friend like a diamond if a diamond breaks you can not able to make.

A group of people named as the Khawarij was separated from Imam Ali (A.S) armed force in the war of Siffin. They took the oath to Kill Imam Ali (A.S) due to the war and conflicts. While the kill one with the help of Vardan with a few men, and a condition of getting married to Quttam, was able to succeed in killing Imam Ali(A.S) “Lion of God”. I remember an incident where a companion had a talk on how to kill Imam Ali(A.S). He said about Imam Ali( A.S) impossible to defeat or Kill him on the war or battleground. The only way to kill Imam Ali(A.S) is while he is praying. That the only moment where he isn’t aware of his surroundings.

Myself Ali Raza Bozdar Co-Founder, and CEO of Knowledge Shout! Social media influencer, Digital Marketing Expert. My Motive is To Serve My Friends And Guide The Right Path To Get Success In Digital World.

Myself Ali Raza Bozdar Co-Founder, and CEO of Knowledge Shout! Social media influencer, Digital Marketing Expert. My Motive is To Serve My Friends And Guide The Right Path To Get Success In Digital World.